Article by Imogen Smith, written for Marathon MTB on 30/9/2016
Read the full story on http://marathonmtb.com/2016/09/30/skills-courses-mountain-biking 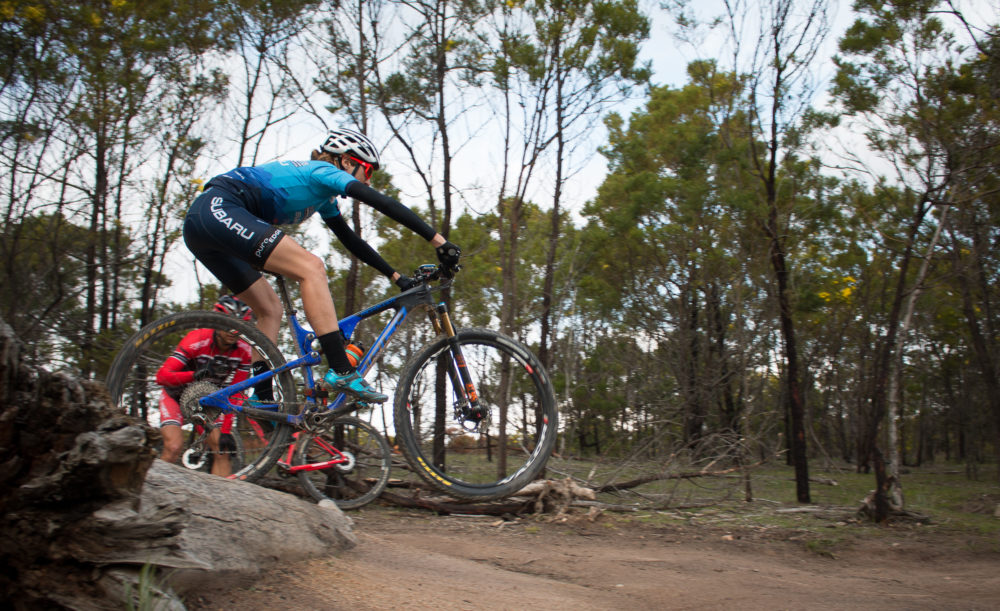 Apart from a few tears of joy, mountain bike racing only made me cry once this year. After our Australian XCM National Champs in Tasmania in April.

I’d worked incredibly hard on my fitness for Nationals and thought the course, with a very long climb to be covered twice, would suit me perfectly. On race day, in spite of cold temperatures and plenty of rain the day before, I stayed positive and relaxed. I climbed strongly, just as I’d hoped, but my race completely fell apart after an hour-and-a-half, on the long descent from the course’s highest point back down to the race village – a techy, fast, slippery, and very long singletrack full of challenges. I’d been sitting in second but lost five places and a good few minutes down the mountain, then my thoughts turned negative. What was the point of climbing so well, being so fit, working so hard, when many of my competitors could flow effortlessly past me while I wrestled and scooted and slid my lopsided way down a descent? I was quite relieved when, a few minutes into the second lap, my crank arm fell off, giving me a valid excuse to end my disastrous race.

After quitting cycling for precisely 26 hours, I sketched out a plan on the back of an envelope. The problem was easy to identify – it had been staring me in the face for years. I took up mountain biking back in the days when berms and jumps were for downhillers and descents were for recovery. I took a long break from racing in the late 2000s and when I decided to get back on the dirt, not only had people moved from 26” wheels to 29ers, singletrack and race courses had evolved as well. I had been left behind, and that is pretty much where I stayed.

26″ and proud while returning in early 2012. Photo: Marianne Westacott

Getting back on track by with skills courses

I’d heard of a new, Canberra-based skills coaching outfit called Ride Technics, with Dylan Cooper, an elite rider with loads of international experience, behind it. I’d heard Ride Technics had worked wonders with other elite racers looking to improve. I booked a flight, tossed my bike in a bike bag, and off I went.

Part of working with Ride Technics is the constant appraisal, discussion, and critique of what you’re doing – and putting it in a race scenario.

Instead of choosing set drills and pieces of trail, my Ride Technics sessions (four over two days) were tailored to the specific problems I was having (fast descents and flow trails). Dylan used video to analyse my movements in corners and through trail, showing me what I could change in my body position and, when finally (after being broken down and rebuilt as a better rider) I got it right, how much faster I was going. It was pretty gratifying to see speed improvements in an hour – much more than I would if I’d spent weeks or even months working on my fitness.

Apart from Dylan’s racing background, it’s his personality that, I think, makes the Ride Technics framework so different and so effective. Cooper is a perfectionist and a thinker and has clearly put a lot of passion and energy into developing an armoury of unique methods for elite racers, all with their own vocabulary. Working with Ride Technics I got incredibly detailed, specific feedback every time I attempted a feature – all the way down to what my fingertips were doing – as well as a bunch of mental images and touchstones to go back to when practising these techniques on my own. This is especially useful because I also got a huge amount of written feedback and, you guessed it – homework.

Everything we worked on had steps of progression, and set me up with a huge range of skills to approach different trails.

The homework must have been effective, because I rode better and with more confidence in races since those two days of coaching in April. At XCM World Champs not a single rider caught me in the techy bits and I even used them to make up ground myself.

20th in the World from the back line – this would have been impossible without the help of Ride Technics.

I made another trip down to work with Ride Technics again recently and pretty much everything I’d learnt anew a few months ago was in good order, so we could move up another level to jumping and drop-offs and even more advanced cornering techniques – stuff I’d never even heard of before. Airtime obstacles usually fill me with abject terror but in the safety of a good coaching environment I managed some feats I’d never before attempted. In a couple of hours, again, it felt like I’d made eons of progress.

There are quite a few very good skills coaches out there, and I’ve had lessons here and there over the years. I’ve found that while helpful, they lacked some of the detail and race-specificity that would equip me to put techniques into practice at speed and under the pressure of competition. The thing about working with Ride Technics is that they operate at the nexus of skills and tactics, and of bike handling and racecraft, so now I know how and when to put in specific efforts, and how to attack or recover on particular parts of a course to best suit my strengths and weaknesses.

So much of the benefit is also discussing how stronger skills can be used with racecraft.

It’s strange if you think about it: musicians, footballers, surgeons, and pilots must be dedicated to learning and improving throughout their careers – or face disaster, but something about the culture of mountain biking suggests that if we just get out and ride more, we’ll improve.

When you’re racing at national and even international level, competition is close, gains are small, and everyone is looking for an edge. I was always too busy doing threshold intervals to slow down and repeat an obstacle I stuffed up, and relied on climbing ability to make up for shortcomings in the singletrack. Much as I hate to give my edge away to the world, I can’t recommend advanced skills coaching for MTBers enough.

If you want to see what Ride Technics offer, head to their website. Like Imogen, you might find the investment in your riding reaps better rewards than an investment in upgrading your bike parts.